Today was our third wedding anniversary. We didn't really do anything particularly special beyond go out for lunch, but we've got a date night coming Friday.

Our wedding seems like yesterday. At the same time, there's a whole lot of adventure in that three years. Consider these statistics:

And that's not counting nearly three years of dating and engagement.

Still, I often wonder what makes a marriage work, and what makes one fail. I've got some experience with the failure part, and I've certainly seen others crash and burn as well. I think a part of it is the discussion that breaks out now and then among friends, when someone suggests that marriage "requires work." I can tell you that this one for the most part doesn't require a lot of work. We certainly have our issues, not the least of which is that sometimes we get overwhelmed and don't ask each other for help, but it never feels like it's really hard.

My only personal comparison comes from my first marriage, but there was no one thing that you could chalk that up to. I think in some ways, we might have gotten married because, after a lot of years, it just seemed like the next thing to do. I'm not saying there wasn't love there (because there still is), but the funny thing is that love isn't enough for the commitment of marriage. Putting time into it isn't a good reason either.

We were talking today about how we moved from wedding to parents really fast, and how that didn't give us a lot of time to be newlywed party types, but obviously we had to think a bit about biology. Having a child at 40 is high risk, and if you wait too long, you end up wearing diapers as soon as your kid is out of them. But the velocity in our case also had to do with the high level of respect we had for each other. We wouldn't have even gotten married if we thought there were too many compromises to make.

When I think down that path, I like to think that our prior experience had a lot to do with the confidence that getting married was right. Diana didn't have a prior marriage, but she did a lot of dating. I dated for about two years, after my divorce and before I met Diana, and there were many take-aways from that experience.

From the positive side, dating Cath was a big deal. Given her strong personality, it wasn't often that I didn't understand what her thinking on anything was. We ultimately had our differences, but she taught me about communication.

Conversely, the shorter-term, in-between dating, revealed a list of qualities that I had to learn were not worth settling for, even if it was just to not feel alone. It's stuff that should be obvious, but people put up with anyway. It's passive-aggressiveness, trying to induce guilt and a host of other toxic elements that you just can't stand for. Passion and love can nearly force us to overlook these shortcomings and settle, and if you have to pick a reason for a 50% divorce rate, I'd say that's it. People can't be honest about being in a shitty relationship. You don't need to have a partner who hits you for it to be abusive and toxic.

When Diana and I had our first few dates, it wasn't clear that anything was going to happen. There are stories with her best friend that I almost didn't make the cut. But as time rolled on, I started to realize that there was no drama, no anger. I had no relationships that were without drama. It was a shocking realization. Even when we moved in together, the only thing I can think of is that Diana loaded the dishwasher "wrong." Obviously that doesn't matter!

We're certainly not perfect, but it's rare for anything to escalate. I catch myself being impatient at times with things that don't matter much, and I'm sure Diana finds things that she does toward me that aren't good. And as I mentioned before, sometimes we forget to just ask each other for help when we're overwhelmed. She does it as the strong mother, I do it as the family breadwinner. I think we both learned how to be independent to such a degree that we forget we're now in a team sport!

We've had a lot of adventures in these three years, and if things work out the way we hope, the next three show no sign of being less exciting. There is no shortage of love in our little family, and I'm often surprised at how much having a child brought us closer together, especially with first-hand experience about how issues with children can drive people apart. That day in Sanibel Harbor led to some very awesome things!

I do wish we could have our wedding over again. That was one hell of a party. Perhaps that's a future anniversary. On a boat. That's how we roll. 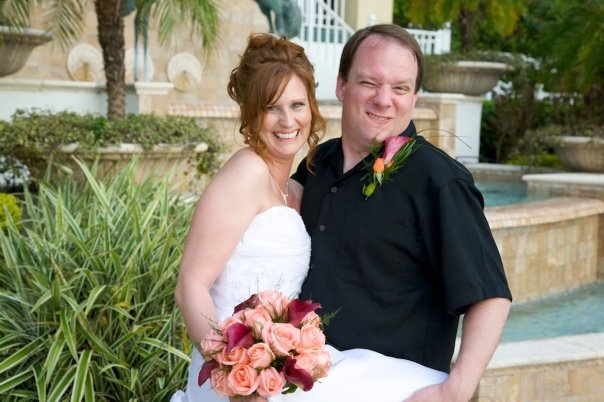