I see the word "conservative" thrown around a lot in politics, and by people who self-identify as right-leaning. I'm pretty sure that they're just using it like one does in a sports rivalry, in part because anyone who disagrees with them is immediately labeled as a liberal. That's not entirely surprising, because the people they do agree with have done a good job of framing everything as an us versus them debate, so if you're not with me, you're against me. I'm disappointed that people are so willing to be manipulated like that, to feel safety in numbers for a position they can't even explain.

For real though, if we are to consider what "conservative" means in the context of modern American politics, the people identifying as such are completely wrong. Let's start with one of the fundamental tenants of conservatism: fiscal responsibility. While Reagan in many ways can be considered one of the key figures in modern conservative terms, he gave little more than lip service to fiscal responsibility. He started us down the road of increasing budget deficits, by cutting taxes and increasing spending. Ironically, relative centrist Bill Clinton was the only president in my lifetime to achieve a budget surplus. Reagan ran up consistently high deficits, both Bush's did better, Obama offset initially high deficits with lower ones, and Trump is back to high deficits. Our debt to GDP ratio is getting dangerously high, and you can thank the "conservative" president and Congress for that.

Conservatives also favor more civil liberties and less restrictions. That starts with getting out of bedrooms and healthcare, and we're seeing the opposite with the constant attacks on the LGBTQ+ community and women's health. Worse, the so-called conservatives root this toxicity in religion. If you're really conservative, you're not interested in getting involved in religion or forcing your religious views on others. Getting out of religion was a founding principle of this nation, and that sentiment is enshrined in the Constitution.

So whatever this current notion of "conservative" is, it's not. Sure, there are variations on the theme when you tack on a modifier, but they turn the core intentions into generally vile and inhuman emotions. Don't be that person. 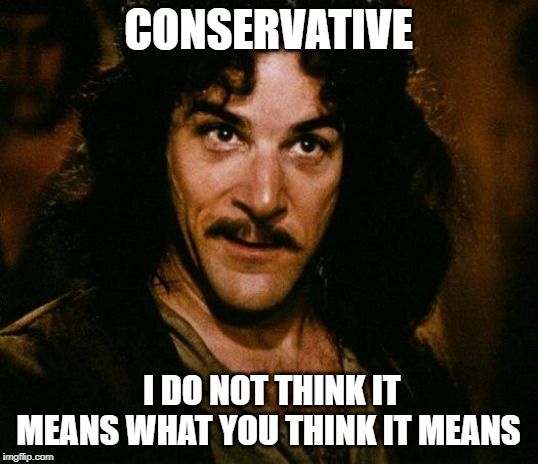