After last year's dabbling with fake tattoos, it should come as no surprise that I finally got around to doing it for real. I was all ready to do it then, but you know, pandemic and stuff.

I had been thinking a lot about what to do first, because there was the lyric from "Sound" by the band James, and then there was the aforementioned rough idea of combining a classic compass rose with a mandala design. The latter is pretty abstract and requires some real artist time, so I figured I'd do the text thing first. After experimenting with the fake stuff, I eventually realized that I wanted it all on one line, all lower-case, in a mono-space font. I really like the simplicity and subtle serif accents of Courier Prime, which I found on Google Fonts. Two minutes in Photoshop, done.

Finding someone to do it was not as straight forward. Here's the thing, the people who are really good artists are also the most technically skilled, and a lot of them are so booked with work that they only do the stuff that they want to do. That's fair, but it's also kind of frustrating. On top of that, some are independent, but not great with communication. One guy whose work I really like here books via Instagram messages, and only once a month when he posts a story saying he's ready to. You can imagine how compatible this is with me, a guy who makes a living in software.

A friend recently got her first tattoo at Hart & Huntington, which is right there in the middle of Universal's City Walk. This sounds like a tourist trap, but it's far from the kind of places you'll find on International Drive or 192. Not saying there aren't good artists in those places (there are, but they didn't return messages), but those are areas I avoid. The roster at H&H is, as best I can tell, all A-players. Their portfolios are all pretty great, depending on what kind of style you're looking for. The guy I narrowed in on was Scott "Cool-Aid" Irwin. Among the folks working from that shop, I felt like he had the most diverse set of skills. He can do all of the styles. My little bit of text wouldn't be that interesting, but I could see from his work that he'd nail it.

I would have liked to have had Diana along, but I ended up going solo for a 12:30 appointment. Parking at Universal is now $26, so yikes. The shop is super clean, and comfortable. The paperwork is all digital, so read and initial a bunch of stuff, and you're good. I only had to wait about a month for the appointment, and they use a bona fide scheduling app.

Scott printed out the text that I had uploaded, and we talked about the size. The trick with the forearm and something so linear is that your skin twists in all kinds of interesting ways there, which I learned with the fake stuff last year. Too close to the inside of the elbow, he said, and it scrunches up, too far over your wrist and it's just never going to be straight. At this point, I was pretty Zen about it, and I wasn't looking for perfection. He put it on the transfer paper and we figured out how to orient it with me standing to cover the 80% cases of relative straightness. I actually like the position, as it seems dynamic when I turn my double-joined elbows or wrists around (not sure which, I just know not everyone can bend their arm like I can).

From there, I got comfortable, and he asked me what my pain tolerance was like. I asked if it could be any worse than having a man push 14 gauge needles through your nipples, and he said I'd likely be fine. It felt exactly as I expected, like someone was poking me thousands of times with a tiny needle. A part of me was disappointed that it didn't hurt more, like I wasn't earning it. In fact, I didn't experience any of the anxiety or hormone rushes of my piercing experiences, which is very unexpected.

I asked Scott and another artist there what had changed in the last 20 years, because in my college days, most tattoos looked like they were done with blunt crayons. They explained that a lot of it was just that equipment was generally more available, and you certainly didn't have to make it yourself. Ink pigments, they speculated, have also improved a lot. Really small needles help too. Above all though, Scott said you could really focus on the craft, and not get wrapped up in the tooling.

I remember a point where I would never even consider it, but Stephanie had a few before and after we met. When I met Diana, she already had her cat tattoo from about seven years prior, and then we moved to Seattle two years later, when I gained an entirely new appreciation for body art. I started to get some ideas even then about what I'd like to get, and time just got away from me. Like, a whole decade. Then Covid, and yeah, I may be having a minor midlife crisis. I'm owning that.

So my first tattoo is simple, and it's a starting point. Because it's small, I speculated that it would almost have an old typewriter ribbon feel due to the variances in my skin and imperfection of the human doing the work, but it's way cleaner than I expected, for now. This guy is so good. I imagine after it heals and fades a little, it will have more of that texture. It's in a spot that rarely gets sun, but I still imagine it will require a touch up 20 years from now.

The other idea, the compass rose and mandala thing, if that makes sense to put on one of my calves, I probably want to do that. It's the only part of my body that I unapologetically believe looks great (thank you bicycles and volleyball). I don't know if I should wait, but probably not. Not saying I'm gonna have a full sleeve in the next year, because I don't have that many ideas, but the genie is out of the bottle now. 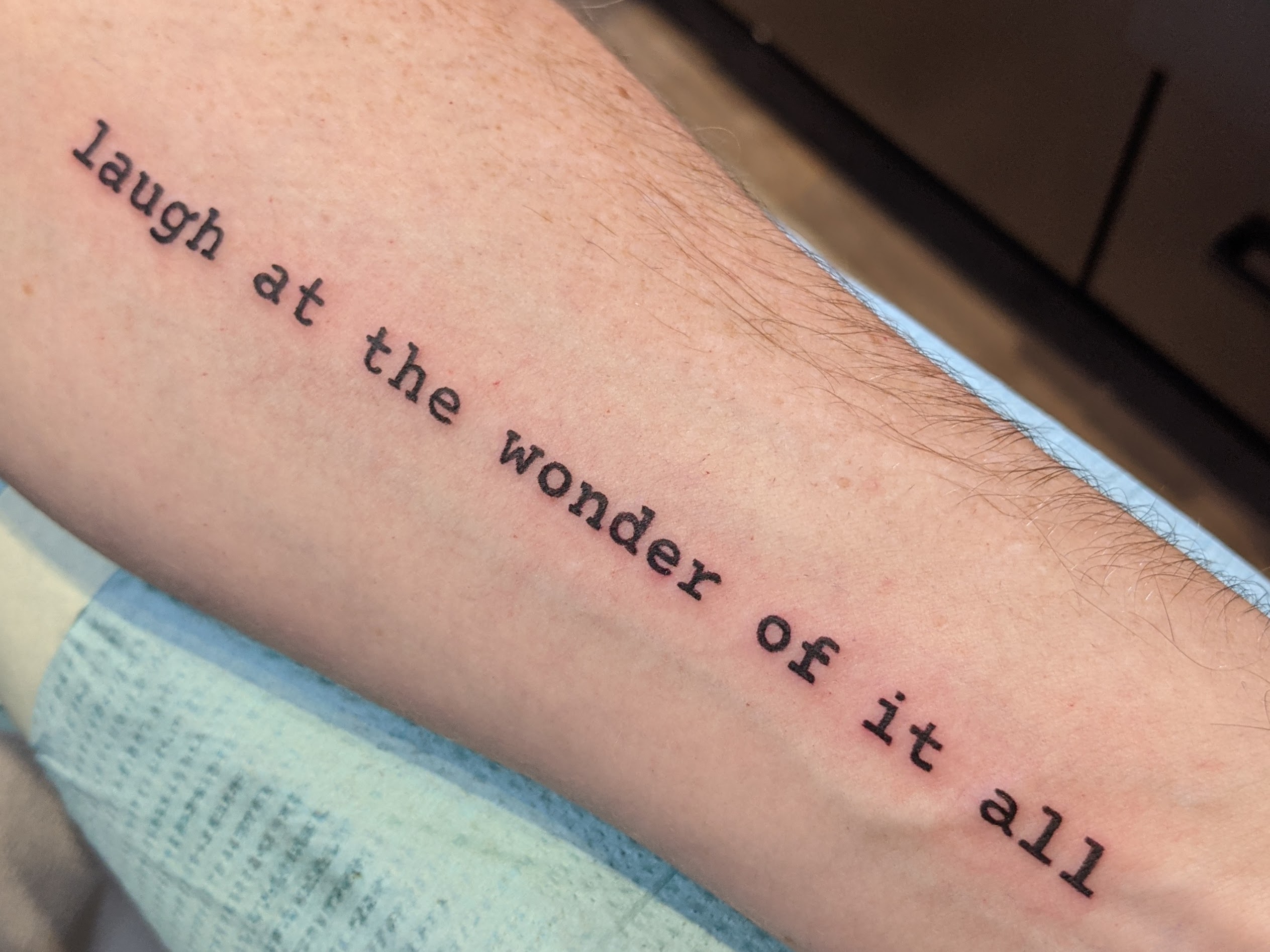