It's hard to believe, but six months ago, a doctor in Seattle made a small incision in Diana's belly, and wrestled out a nine-pound, purple baby with red hair that we named Simon. Not much later, I was holding him in my arms, feeding him a bottle for the first time to get his blood sugar up, and not much time after that, Diana was breast feeding him.

That day was one of the scariest and most wonderful of my life so far, but the times in the hospital those first two nights didn't really have the, "Aw, look what we did," moments you see in movies. They leave out the parts about the mother bleeding in huge quantities and the complete exhaustion of the parents. But I will say that it's the first time I've ever been in a hospital that I didn't view it as a depressing and awful place.

Once Simon was home, we had plenty of those "aw" moments, almost on a daily basis. That first month was exhausting, but by the end of it, we at least had a pretty good rhythm taking care of him. Of course, his needs were changing almost daily, but we managed to keep up with him. Even when he was tiny, he seemed to surprise us every day with new things. When I got sick, and then he got sick, that was not fun, and the challenges of breast feeding weren't either. But by the time I went to work, we had an adorable, fast-growing little boy.

The physical changes in the first three months were pretty dramatic. You look at photos and it was like he was different every week. Since then, he doesn't look that different, though he's grown like a weed. From the start, he has been three to six months ahead of schedule in clothing. And now his latest trick is six teeth, six months after he was born.

The cognitive and motor skill changes have been continuous and absolutely fascinating to me. While he could do little more than his Jedi mind trick hand wave at first, today he can sit on his own (if you put him there), hold toys in both hands, kind of get his pacifier in his mouth and roll over on the rare occasion he feels like it. He just started throwing things too. His repertoire of noises gets bigger just about weekly. In fact, he seems to be developing a new laugh now.

The changes for us have been huge as well. Diana's full-time job after we moved was chief nesting officer, and there's no question that she made our apartment a home and a place for our new little guy. Her reading and research about everything from strollers to formula to sleep training has been thorough and amazing, to an extent I could never do. Yes, I often suggest that she should relax more and roll with stuff, but I can't deny that she has been an ultimate mother and the true head-of-household. For someone who has worked a regular job for 20 years prior to our moving and parenthood adventure, she has adapted in grand style.

I've changed too, but mostly in internal ways. With the "breadwinner" role, I feel like it's my duty to bat clean-up during the week, in part to give Diana a break and so I can make up for the time I can't be with him. Simon's routine involves me feeding him for dinner and giving him his bath.

Being a parent, for me, has made me look a little more constructively at my life, and how to change and balance it. People are fond of saying that your priorities change, but that hasn't been my experience. I have additional priorities, but the old ones haven't gone away. In fact, many of the preexisting priorities align well with Simon's. I would say that I'm even less likely to tolerate suboptimal aspects of life because if I'm unhappy, I can't be an effective parent. So for example, I want to enjoy my job and have upward momentum, because that makes me happy, and happy me is happy daddy. And as a bonus, happy daddy can provide for his family.

Simon has brought out a great deal of team work, too. Diana has kind of always done her thing, I've done mine, and we've managed to live together in a sort of harmony like that. We've both just stepped in as necessary, when we ask for help. Our communication is not perfect, but I'd wager that it's generally awesome. We never play the game, "If you love me, you'll just know I want you to do this." If one of us exhibits this or some other toxic behavior, we call each other out on it. When it comes to specific things about Simon, sometimes we don't have to say anything, because honestly, most of the time you want to be around him! I feel bad for any set of parents who are not as awesome as we are in our ability to help each other out.

At the half-year mark, in a lot of ways we just wish Simon would almost slow down a little. He's growing up so fast. We, and especially Diana, have had some really hard days lately, because of his quad-teething bout, but even the briefest smile and giggle from him makes it better. I can't imagine not having him in our life. He creates so much love in our mini-family. 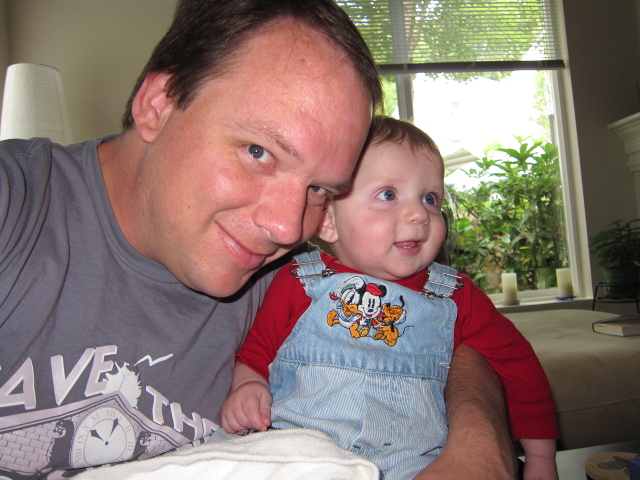