About 14 years ago I bought my first Mac. Prior to that I had a continuously evolving desktop computer that I replaced or added components to. I bought a lot of video cards, and every other year or so I replaced the motherboard and CPU. Hard drives were almost a constant replacement, either because they were never big enough or they would sometimes fail (at one point I even did tape backups). But that first Mac I bought was the first one that used an Intel CPU. It was the first MacBook Pro, and you could do Bootcamp to dual-boot into Windows if you needed it (I did). A year after that I bought a Mac Pro, the classic "cheese grater" design. I replaced that in late 2009 with a 27" iMac, and replaced that one in 2015 with another iMac. I got a lot of mileage out of those computers.

Last year, I felt the squeeze on my laptop, a 2014 MacBook Pro (before they made the keyboard suck and added the useless touch bar). 8 gigs of memory wasn't enough when I needed to run Windows in a VM and Docker containers. I scored a really amazing HP laptop, and a year and change later I absolutely love it still. Windows is definitely not as refined as OS X, but only because they retained the classic administrative stuff in addition to the newer UI. But the hardware was so great. HP did a great job, and frankly there are great equivalents from Dell, Lenovo and others. I can roll with Windows as the primary OS.

For more than a year, Simon has been playing Planet Coaster on a Bootcamp partition on my iMac. It ran OK, but not great, especially for that high resolution monitor. Planet Zoo comes out later this year, and that looks amazing. But while I love my HP laptop, I really wanted a proper muscle computer for my office. Honestly the iMac is still pretty great. Apple's 5K screen alone is completely worth it. But as was the case for laptops, Apple has continued to stick to price points that don't match the value of the innards. For the longest time, if you really wanted the good stuff, even with a self-built machine, Apple was competitive. In the last two years or so, that stopped being the case.

So I figured, what the heck, I want a project to put a computer on my desk. 4K monitors finally became a real, bona fide thing outside of the Mac world, and Prime Day got me thinking about it even more when an LG monitor went from $480 to $300. Digging in deeper, I found a bunch of stuff was on sale, including a nice Corsair case and liquid cooling unit, a good video card. My budget was $2k (the last iMac I bought was $2,500), and at the end of the day landed at just $1,800 for some really great components. Here are the specs:

I also ended up with a big 1000W power supply from EVGA, after returning a 750W model that had cables that were too short. On the advice of a friend, I also bought a liquid cooler for the CPU because it's very quiet and would make it easier to overclock the CPU, if I so desired. Times sure have changed since the last time I looked at those. Back in the day, you had to add your own water, but these come as a sealed unit now!

So while I haven't built a computer in 14 years, some things are generally the same. Some things aren't, like the fact that there are no external facing drive bays. The top performing CPU's still cost in excess of a grand, but you can get crazy good stuff for less than $400. AMD recently introduced a line of great midlevel CPU's, and back in the day I had a few as well that were way cheaper than the Intel equivalent. In this case, the online consensus and data suggested that non-hyperthreading Intel CPU's benchmarked the best for gaming and for video editing (something I may potentially do more of), and even then, the cost difference was around $30. So I went Intel this time with a piece that seems to be a sweet spot on the performance/price curve. Plus, being unlocked, I can overclock the shit out of it if I want. Initial testing shows I can push it to 5GHz, well beyond the 3.6GHz it's rated for. Granted, I have to crank up the liquid cooler and fans to keep it from melting, but it's possible.

Despite inflation, the best non-top-of-the-line video cards seem to be in that $500 range. Apparently AMD forced that issue as well with a recently introduced line of GPU's, but that's been good for everyone. The 2070 cards offer a pretty crazy amount of pixel pushing without costing four figures, so I figured I'd get big-ish with one to make it last. The most I ever spent in the old days was probably $250, so this was a big deal to spend $430. I felt like this was OK given my ability to stay in budget overall, though I probably could have spent a hundred dollars less and still clocked some solid results. Regardless, on my first try running Planet Coaster, I was able to run it at 4K resolution, all effects on, and still maintain low 30's frame rates. If I overclocked the CPU, I could get low 40's. I know gaming nerds think you need 60fps, but for a sim like that, your eyes don't care as long as it's consistently higher than 30. Also, I can't believe how big video cards are now compared to 14 years ago.

Having SSD's in laptops (and my most recent iMac) now for about 8 years, I'd never go back to mechanical drives. These tiny M.2 slots offer crazy fast throughput, and a terabyte drive was under a $100. That's nuts. Choosing that was a no-brainer. This thing boots Windows in a few seconds. The motherboard makes it silly easy to overclock the CPU, and without pushing it too hard, I was able to do 5GHz, but settled on a more conservative 4.6GHz. It has 8 actual cores, and I'm amazed at the development workload I can give it. Should be interesting to see how I can load test my forum app, though realistically, I'd never allocate 8 cores or that much RAM to it in production.

The building went about as expected. As was the case back in the day, you don't want to spend too little on a case, because if you do, the inside will be made of razor blades. This Corsair case was one of the Prime Day deals or deal of the day or whatever. $100 for a case with tempered glass and LED lit fans seemed reasonable enough. It's fairly well designed, with good rubber gasket knockouts to hide most of your cabling on the back side. The power supply sits on rubber feet so as to isolate any vibration there. The top has a magnetic cover that you can pull off and clean. In my case, the radiator for the liquid cooler is up there, so with two fans I imagine it pulls in two fifths of the air. My only complaints are that the PSU cover is a little difficult to seat, and it would be nice to have a little more thickness on the back to route the power cables and other stuff. Getting those to sit flat was not something I entirely succeeded with, and there's a barely perceptible bulge at one corner.

The biggest fail was that the first power supply I bought couldn't adequately reach the motherboard and the video card when routing the power cables through the back of the case. Also, still surprised that video cards need their own power these days. The replacement I got (yay Prime Now!) does a full, over-provisioned 1,000W, and the cables detach at the PSU itself, meaning I don't have tons of unused cables sitting in there.

The thing I forgot is that these motherboards ship with old firmware, so in cases like this where the CPU is significantly newer than the motherboard, but uses the same socket, it'll be out of date. Windows kept blue-screening on install, when I remembered this old BIOS problem. I snatched the newer version to find the old one was more than a year old. After flashing it, the install went perfectly fine.

I haven't done any serious development with it, but can't wait to try it out. Simon keeps noticing all kinds of graphics effects that he couldn't see before on Planet Coaster. I'm looking forward to seeing how it looks when I run a full stack of products on my app (web app, SQL, Redis, ElasticSearch, Azure storage). It's fun to go back to these days of modular comprooders, knowing I can swap something out if I want. I don't know if I ever will, but it's nice to know I can. It was deeply satisfying to build. 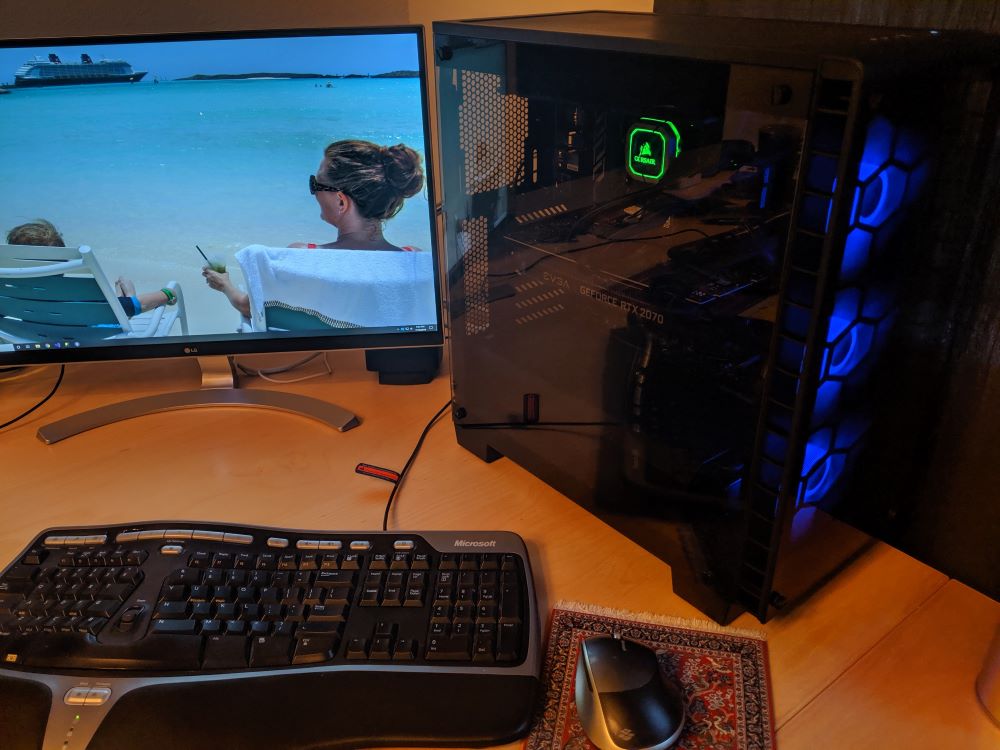