Review and more love for Hamilton in Orlando

It's crazy the way Hamilton keeps being a thing and keeps growing into more and more of a phenomenon (yes, the lyrics seep into everything). With three tours now in addition to the runs in New York, Chicago and London, more and more people are getting the chance to see it, and some are hearing the music for the first time. I was talking with a coworker at lunch today who knows a volunteer working at the theater, and he said she avoided it for the last two years and then was blown away that it actually lived up to its reputation. I hear a lot of that.

I reviewed the show when we saw it in April, and I think I generally stick to those observations. A few weeks ago I even wrote about the enduring love for the show. The only thing that I can really add at this point are some observations about the #PhilipTour cast as it stood in Orlando, and taking Simon to see it.

Although first, it's worth mentioning that, while I have no official connection to the Dr. Phillips Center beyond Diana working there part-time, I still take great pride in seeing this amazing show in this amazing place. The Walt Disney Theater is such a beautiful place to see a show, and this is the 22nd I've seen there (plus one in the smaller Alexis & Jim Pugh Theater, which is next to the Disney). I hope the touring companies love performing there as much as I enjoy seeing stuff in that space. While I certainly appreciate older, historic theaters, this one is something for Orlando to be proud of. It's the little things, like the "wave wall" in the lobby spaces (which they infuriatingly don't animate the lights on anymore for unknown reasons), to the performing arts school, to the strangely deadening sound when you stand next to a wall.

If there's a negative to hearing an original Broadway cast recording before you see a show, it's that it tends to shape your expectations about what the actual show should sound like. As I said when reviewing the show in April, the hip-hop nature of the show leaves a lot of room for interpretation, especially for the male parts. To that end, Nik Walker as Aaron Burr absolutely blew me away, as his take was way different than Leslie Odom's version. That's not in a better or worse way, but he made it his own and it was amazing. Similarly, the "four of us," Elijah Malcomb as Laurens/Philip Hamilton, Fergie Phillipe as Mulligan/Madison and Kyle Scatliffe as Lafayette/Jefferson were so, so good. Joseph Morales as Alexander was different, but he grew on me. He seemed tentative at times and really went for it at other times. I can only imagine wanting to do it your way and not emulate Lin-Manuel Miranda. I again felt that Washington is a challenge to play, and Marcus Choi did great in the first act but it's hard for "One Last Time" to fit anyone who can't do full on R&B or gospel. The recent remix of that song with Christopher Jackson and Obama probably made that standard even more impossible to hit. Oh, and you can't not acknowledge Jon Patrick Walker as King George, because he reliably brought the funny.

The ladies get less flexibility because more of their parts are straight singing, but these Schuyler sisters were every bit as good as the originals, and maybe better because we got to see them. Shoba Narayan owned the stage, whether she was encouraging Hamilton to "Take A Break," beatboxing for Philip (seriously, it's funny every time), "Burn"-ing the letters or ending the show. Similarly, Ta'Rea Campbell really made you feel the regret in "Satisfied" and the sadness in "Uptown." Rounding it out, Nyla Sostre as Peggy/Maria Reynolds made the best case for a lonely woman in a red dress tempting a bastard orphan. I just don't know how these three could have been better.

Now that I've seen it more than once, I appreciate more than ever the simplicity in the scene design and a lot of the subtle choices made with lighting. This is a dense show with a whole lot of dynamic things going on, so the easy way out is to make the lighting into a rock concert vibe, but instead it almost always serves the story. Paths on the stage show direction. Color conveys the lust of Maria and the self-inflicted harm of Hamilton. Subtle motion and color combines to imply oceans and hurricanes. It's really brilliant. And it does get a little bit apeshit during "Yorktown."

The dance break in "Yorktown" gets thunderous applause, every time, and the song isn't even done. That song alone is worth the price of admission, and it's the best several minutes of live theater I've ever seen. The choreography and motion is so masterful that I wish you could stand up and clap at the end of it, even though you've got two more songs (and a sad moment when we learn about Laurens' fate) before the end of the act. Oh, and the music makes me lose my mind, too.

I don't know how I can gush about it still, because even the art that I love the most I can typically find flaws in as time goes on. I'm not there yet. It's so end to end good that I'm perfectly happy to invest 2.5 hours to just retreat into it and listen. With three tours now, I can only hope that it comes back through town, and the sooner the better.

The important thing this time around is that we got to take Simon to see the show. He loves the music, understanding he isn't to repeat the profanity, of course. Kids with ASD engage in creativity often in different ways, or sometimes not at all, so whenever he latches on to art of any kind, but especially music, I want to encourage that. It's a really long show, but he did fairly well, saving his questions during the first act to the intermission (and you bet he remembered all six questions). The second act was a little harder. But like his parents, he too was blown away by "Yorktown." As a future techie nerd, of course he loved the movement of the turntable on stage. He asked good questions about how much was based on reality, and it was the first time I think he's heard that slavery was a thing, and that equality is still a struggle. That's important, because his classmates are incredibly diverse, but his normal isn't representative of larger challenges in our society.

So glad we've had the chance to see this a few times now. Imagine when they start licensing it for amateur performance. It will be the new Grease in high schools everywhere! 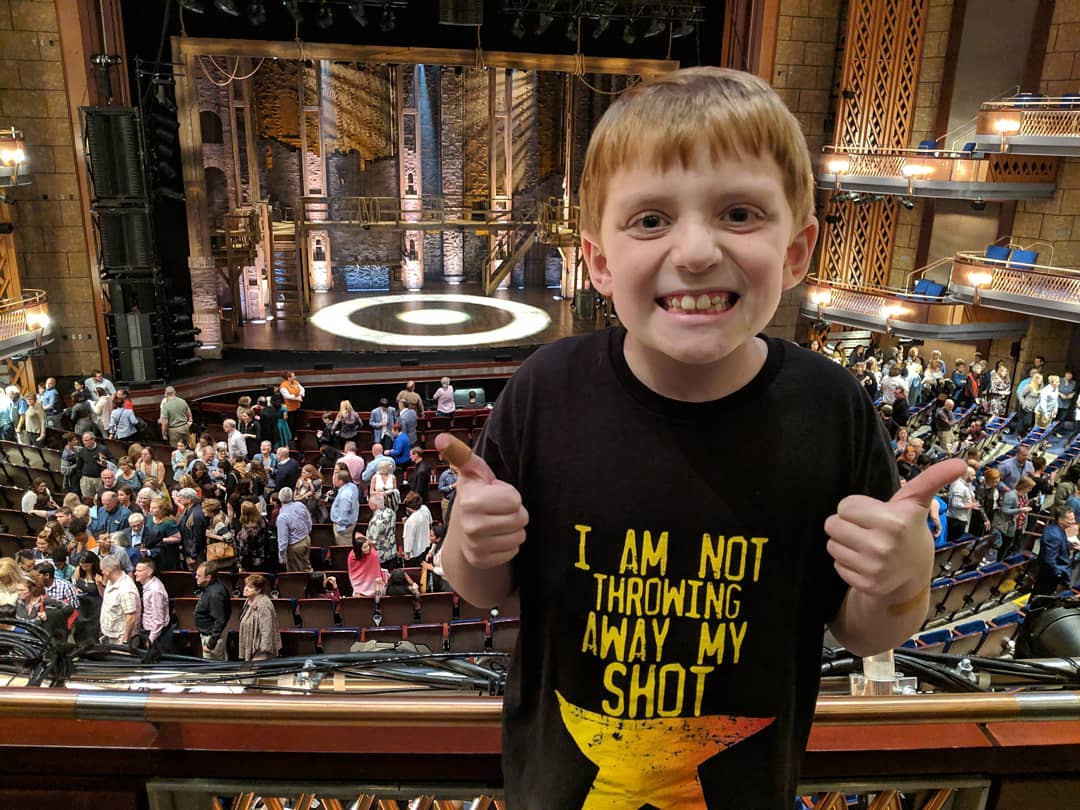