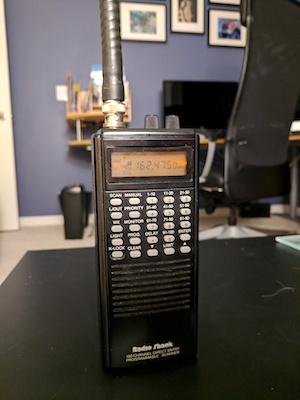 Way back in my college days, I bought a radio scanner from Radio Shack. We had one in the newsroom of our college TV station, and it was kind of cool to hear when there were fire dispatches or big police actions. As it turns out, there were other interesting things to listen to as well, not the least of which was campus security and the cordless phones that you weren't supposed to have in the dorms because of the obvious bandwidth constraints at the time (cordless phones used only 10 channels at the time). I'm not sure why people thought that was a secure way to use a telephone. You could also listen to air traffic, and my favorite thing, the Skywarn nets, where people drove around reporting storm damage via amateur radio that could largely be seen on radar.

I make fun of those guys, because technologically, amateur radio isn't particularly interesting or even necessary these days. But prior to the late 90's, they definitely delivered a great public service that probably saved lives when there was particularly severe weather, especially with tornados. With the Internet and fairly robust cellular service, to say nothing of advances in radar and measurement devices everywhere, they're a little obsolete. Until, of course, some massive disaster or nuclear war knocks us back into the stone age... then the radio guys will be survivors.

These days, my scanner is hopelessly obsolete, but even the newer models are of limited use because law enforcement in particular tends to encrypt their radio traffic. I think it's outright illegal to decrypt it if there was some technological way to do so. So yeah, you could receive the signal, but you wouldn't be able to listen to it. I had been entertaining the thought of upgrading for a year, but once I finally looked up the data, I decided it wouldn't be that worth it if I couldn't listen to police traffic. Although, I suppose I could listen to Disney, but that would probably get boring quickly.

The old scanner still has one genuine use: Weather radio. NOAA will probably keep operating that service until the end of time, which is a good idea because it's inexpensive low technology that just works. Battery operated weather radios are cheap. So if we get knocked back to the dark ages after Irma, I'll at least have a weather radio.