I decided after weeks of beating myself up for questionable productivity that I would stop and actually count the hours I worked on stuff at the end of this week. The news is better than I expected.

I spent about ten hours on administrative and daily task stuff, which includes junk like accounting, mailing club cards, posting news and other stuff that I've basically been doing for years. I'm actually a little surprised that it was that much time. In addition to that, I spent about 20 hours on programming stuff (plus whatever I do still tonight or tomorrow). So that's a little over 30 hours in a work week, scattered about through whatever times I was motivated enough to concentrate. That's not bad. When I think about all of the time in every day job I've ever had spent dicking around at the water cooler, surfing for porn or updating Facebook, I'm easily hitting that same level of productivity. And for people who believe in four-day work weeks, I'm there. And Monday was spent at Kennywood!

As far as tangible results in the programming hours, it has actually been a pretty good week. Getting the trip report association bits up into the forum was a good start. Then cracking open my multi-file uploader went relatively well. I spent quite a bit of time refactoring it for general use, so it can be for whatever file transfer scenarios I want, and not just images. Funny how sometimes you write yourself into a corner and do the wrong thing. I kept having the control be responsible for redirecting you to some other page when it was done, which was stupid for a number of reasons. Once I realized that should be delegated to the page the control sits on, duh, everything went smoothly after that.

The neat thing about that project was that it was multi-discipline. It was Silverlight, Javascript, Web services and a somewhat goofy four-project solution. But all of the parts work, and I already know where its second application will fit, and pretty easily at that.

Now if I can get the hotel chain that asked about buying ads on my sites to place an order, I'd get my financial shit together too. That would be nice! 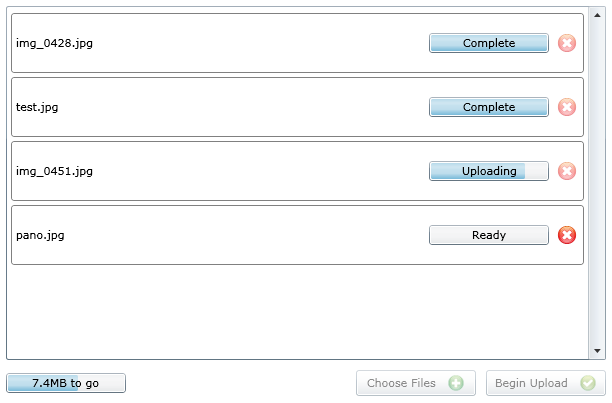